Teacup dogs are becoming more popular every year thanks to celebrity teacup puppy parents. Teacup dogs are exceptionally small dogs that are bred to be as small as possible. That being said, there are tons of teacup dog breeds that you can look for if you are interested in owning one of these super cute puppies. But are Cavapoochons considered to be a teacup breed?

In short, the cavapoochon is not considered to be a teacup breed. However, depending on the gender and what breed of poodle the Cavachon parent is bred with, you can technically end up with a teacup cavapoochon.

Dogs are considered to be teacups if they are less than 15 inches tall and weigh less than 15 pounds when fully grown. Cavapoochons can only meet this requirement if the Cavachon parent is bred with a toy poodle and if they are the runts of the litter. Unfortunately, Cavapoochons barely miss the teacup category by a few inches and a couple of pounds, making them a toy bread instead.

As you continue to read this article, it will go more in-depth about precisely what it takes to be a teacup dog breed. Furthermore, we will be discussing what a cavapoochon is and why it is hard to get a teacup cavapoochon. Finally, we will offer you some other teacup dog breed alternatives.

What Exactly Is a Teacup Dog? Although teacup dogs are not precisely a breed, they act more like a classification of dogs. Inside that classification is a slew of breeds that can be teacups.

How Are Teacup Dogs Bred?

For instance, some breeders will inbreed the two smallest puppies of a litter in hopes of producing an entire litter of smaller dogs. However, inbreeding can increase the risk of genetic disorders passing on to the puppies.

Furthermore, breeders will also employ a more devious approach to breeding teacup puppies by malnourishing them. Doing so can result in stunted growth and other serious issues with their nervous, skeletal, and digestive systems.

Unethical breeders are also known to scam potential buyers. For example, some breeders are known to sell “teacup” puppies claiming they are teacups by saying they are a few weeks older than they are. After a month or two, you will end up with a much bigger dog than you expected.

While this is not the case for all breeders, there are other breeding tactics that much more reputable breeders will use. For instance, instead of breeding the two smallest runts from the same litter, they will breed the runts from two non-related liters to produce their teacups. However, this process takes longer and will typically need a couple of generations to reach the desired teacup size. This longer process makes these dogs much healthier than the unethical approach and much more expensive.

All dog breeds have some health deterioration. While heart disease, vision issues, and diabetes are shared with all dog breeds. However, because teacup dogs are so small, they experience health issues relating to their size alongside their breed’s common health issues. Some of the most common concerns among all teacup dogs include: 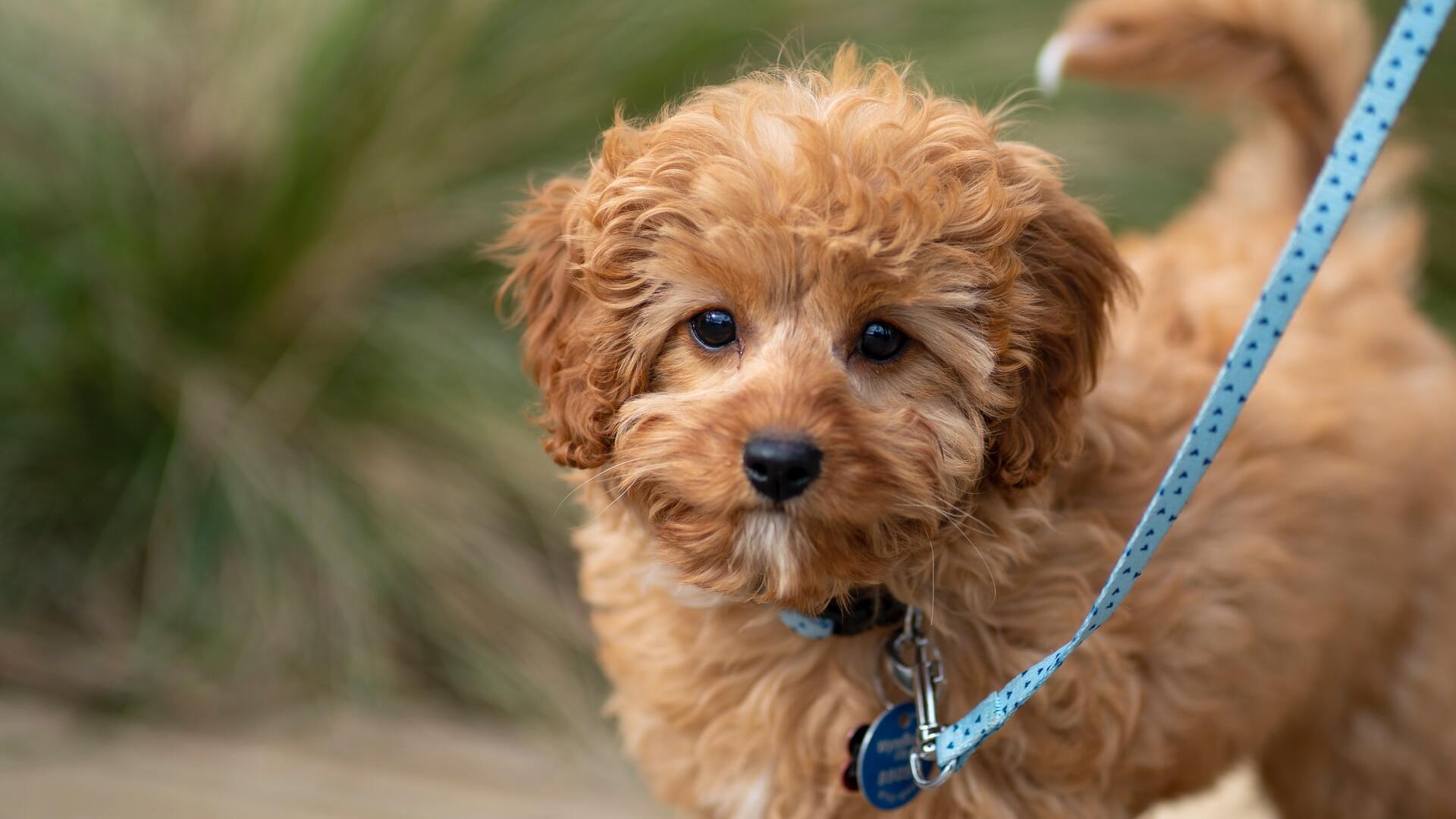 A cavapoochon is an extremely popular small dog breed first invented in 2001 by a breeding couple named Steven and Linda Rodgers. The Rodgers were popular dog breeders famous for their Cavachon puppies, a mix of Cavalier King Charles Spaniel and a Bichon Frise.

After a few years, they decided to introduce another popular breed into the mix, the Toy Poodle. The result was the cavapoochon, which would make them quarter cavalier king Charles spaniel, quarter bichon frise, and half poodle. These adorable puppies were instantly famous due to their permanent teddy bear-like appearance.

Cavapoochons are mostly considered to be a toy breed. But as previously mentioned, it is possible to get a teacup cavapoochon. Still, they will be walking the line of the teacup and toy classifications.

Cavapoochons will typically weigh between 15 and 20 pounds when fully grown and have an average height of 15 to 18 inches. The male cavapoochons will be on the higher end of the scale. This makes the female cavapoochons the only natural candidate for the teacup category. Still, they will need to be the runts of the litter. However, cavapoochons can be much bigger if the breeder uses any of the larger breeds of poodles as one of the parents.

Furthermore, Cavapoochons combine all of the most desirable traits from their parents. They are thrilled being the perfect lap dog and lounging around like the cavalier king Charles spaniel. While also maintaining their love for playing like the bichon frise. Cavapoochons are also very intelligent and inherit their extraordinary wit of the poodle and love to learn tricks and play with complicated toys.

Cavapoochons are a very rare breed and can have a very long lifespan for dogs, living up to 18 to 20 years comfortably. Furthermore, the cavapoochons have adopted the nickname of “the dog that never grows old” and always looks like a teddy bear throughout their entire life.

Because cavapoochons are so rare, they have a steep price tag that goes along with them. You can expect to pay at least $3,000 for a cavapoochon puppy from a reputable breeder.

As previously stated, all dog breeds have some health risks associated with their breeds, and cavapoochons are no exception. While cavapoochons inherit all of the desired qualities of their parents, they are also susceptible to their most common health issues.

This condition is more common in cavapoochons when they reach their later years and is completely unavoidable if the gene is present. However, this condition can be caught early with regular vet visits and a prescription if your pup starts to show the early signs.

Suppose you notice your dog is having a seizure. In that case, you need to act fast and move any hard object away from them immediately. Quickly support their head in the palms of your hands to prevent further injury caused by the shaking of the seizure. Avoid moving your dog and lifting them. When supporting their head with your hands, keep your hands on the floor and do not lift your dog’s head any more than you need to to get your hands underneath their head. Once the seizure has passed, take them to their vet as soon as possible.

Fortunately, this is by far the most straightforward health issue to solve. Cleaning your dog’s ears with a cotton pad dampened in an ear cleaning solution will solve the issue quickly and help prevent further complications. It also helps to have a groomer trim the hairs inside of their ears to prevent potential blockages.

While some cavapoochons can be classified as teacups, the entire breed as a whole is mainly a toy breed. Because of this, we have gathered a shortlist of true teacup breeds that you should look into if you are purely looking for an extra small dog that you can take just about anywhere.

Teacup Chihuahuas have had their share of popularity, from featuring in fast food ads to being carried around in celebrities’ handbags. But life isn’t all glitz and glory for these teeny-tiny dogs. Chihuahuas require adequate socialization and training to avoid becoming scared and defensive around strangers. They also require frequent physical activity and mental stimulation.

Pugs in teacups are excellent apartment pets. They are perfect for tiny living areas because of their petite height (weighing 3 to 7 pounds), laid-back disposition, and moderate activity requirements. Although some pugs are obstinate, they usually respond well to training, especially when treats are used as an incentive.

Poodles are excellent family dogs because of their intelligence, athleticism, and friendliness. Teacup poodles weigh around 4 pounds, while standard poodles average 45 to 70 pounds. Is there a poodle feature that comes in handy? They’re not heavy shedders. Their curled coats don’t shed a lot of hair, which is good for your allergies and your vacuum cleaner.

The Maltese are not just one of the world’s oldest breeds (it dates back approximately 3,000 years), but it was also formerly considered nobility. The weight of a teacup varies between 2 and 4 pounds. These dogs are ideal for folks who desire a cuddling partner because of their petite size and low energy.

Yorkshire terriers are popular dogs in their typical tiny size, and the teacup type is no exception. These little canines might weigh as little as 2 to 3 pounds yet have big-dog characteristics. Yorkies are known for being outspoken, protective, and self-assured. They’re also highly devoted to their family.

Teacup Shih Tzus are known as the “diva dogs” of the canine world. These dogs, on the other hand, are incredibly athletic. Shih Tzus have relatively robust bodies behind their long, silky hair and were bred for agility courses. However, don’t overwork them because their flat faces might lead to respiratory problems and overheating.

Because of celebrity success and the adorable nature of teacup dogs, their popularity grows every year. While it is possible to get a teacup cavapoochon, they will be walking the thin line between teacup and toy. However, cavapoochons make amazing family pets regardless of size and will make a fantastic addition to your family. Contents1 Corgis Behavior, How Protective Are They?2 Corgis Will Protect Their Owners By Instinct3 How To Train A Corgi To Be A Guardian Dog?3.1 Puppy Training3.2 Adult Training4 Conclusion  Currently, corgis are one of the most popular dog breeds. They are small, fluffy, and have corkscrew tails. But are corgis good as a guard dog?… Contents1 Papillons Shedding: What You Need to Know1.1 Papillons Hair and Coat Type1.2 How Much do Papillons Shed?1.3 Do Papillons Produce Lots of Dander?1.4 How to Minimize Papillon Allergens Papillons are becoming more and more common as family dogs. This is because they tend to be friendly, good with other dogs and people, and are… Contents0.1 How Did Mini Poodles Come to Be? 0.2 What Do Mini Poodles Look Like? 0.3 What Temperament do Mini Poodles Have? 0.4 Do Mini Poodles Shed? 1 Are There Any Cons to Mini Poodles? 1.0.1 Regular Grooming is Required 1.0.2 Poodles Do Poorly in Noisy Environments 1.0.3 Poodles are Not Happy to See Strangers 1.0.4 Poodles Need Extensive Exercise Mini poodles are… Contents1 What Is A Teacup Dog?2 What Are The Advantages Of Owning A Teacup Dog Breed?3 What Health Issues Do Teacup Dogs Have?4 Best Teacup Dog Breeds For Families5 Final Thoughts Teacup dogs are incredibly popular pets since they always look like puppies throughout their entire lives. It’s no surprise that they may sell for…